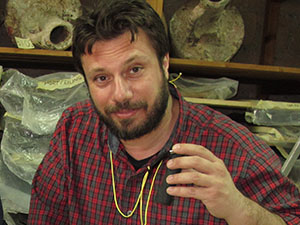 Antonis Petrou is a Marine Biologist and has worked as such in Cyprus since 2001. He carried out his studies in London and has a B.Sc. and M.Sc. in Biology and Aquatic Resource Management. Upon completion of his M.Sc he returned to Cyprus where he initially worked as a researcher at the Department of Fisheries until 2003 when he formed his own consultancy company that deals with the marine environment.

He carries out research, provides expertise and services related to the marine environment and has worked extensively with the aquaculture industry and the fishing sector. Antonis has carried out extensive coastal marine survey work around Cyprus relating to the environmental impacts of coastal projects as well as for research projects. Over the years experience has been gained in organizing and carrying out coastal and open sea research expeditions. He has participated in EU funded research projects such as MedVeg, MedMPA, and vocation training projects for fishermen, FISHTRAIN.

He has extensive field experience in experimental fishing surveys (MEDITS) as well as carrying out various research relating to fish around Cyprus. He is currently also doing a Ph. D. related to Lessepsian Migration and the alien species Lagocephalus sceleratus.