Magdalene Papatheodoulou completed her MSci in Marine & Freshwater Biology with Honours of the First Class in 2018 from the University of Glasgow. During her academic progression she was a member of the HEAD OF COLLEGE SCHOLARS LIST SCHEME, and upon her graduation she was honoured with the GRAHAM KERR MEMORIAL PRIZE.

Over the course of her career, she has worked on a number of research and consultancy projects for both the European Union and the private sector. She has participated in projects and conferences conducted in Cyprus, Scotland, Denmark, Egypt and Crete. Magdalene has worked in an assortment of research areas including benthic /epibenthic baseline surveys, anthropogenic impacts on the physiology and behaviour of marine organisms, and fishery-induced evolution.

Her Honours Thesis was focused on ‘The Effects of Endocrine Disrupting Compounds (EDCs) on the Male Benthic Shark Galeus melastomus (Blackmouth catshark) in the Eastern Mediterranean’, and her Master’s Thesis on ‘The Endobiotic Communities of Marine Sponges in Cyprus (Levantine Sea).

She is currently a PhD candidate at the University of Glasgow, with her research area concentrating on the ‘Immediate and Transgenerational Effects of Catch-and-Release on the Physiology and Behaviour of the Atlantic Salmon (Salmo salar). 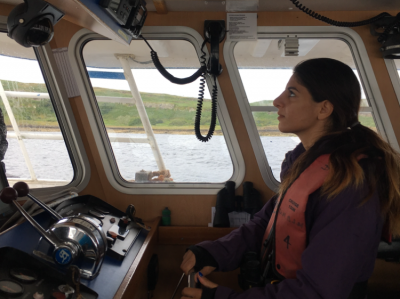