Rebecca Katsaris studied Preschool Education and Psychology at the University of Cyprus and the University of Granada, in Spain. She completed a Masters of Research in Spanish, Portuguese and Latin American Cultural studies at the University of Birkbeck in London, UK. Since 2007, she has worked as a preschool teacher in Cyprus, Spain, England and Colombia, in public and private schools. She has experience in designing and implementing educational programs for children and families in Cyprus and abroad dealing with multicultural education. She has collaborated with an array of social and cultural organizations such as ARTos Research and Cultural Foundation, Bank of Cyprus Cultural Foundation, (Nicosia, Cyprus), ART4Space (London, U.K), Colombian Ministry of Culture (Bogota, Colombia), University of Santiago de Cali (Cali, Colombia), The International Book Festival (Bogota, Colombia), 8th Bogotá Literature Festival organized by Fundación Fahrenheit 451 (Bogota, Colombia), Gabriel García Márquez Public Library (Bogota, Colombia) to mention a few. In 2015, while employed by Lambeth Council (U.K) she was selected to travel to Kenya representing Kingswood Primary School (London, U.K) as part of the British Council’s ‘Connecting Classrooms Exchange Programme’. In 2016, Rebecca co- organized workshops for children and their families at the 10th International Congress “Vuelven Los Comuneros” in Bucaramanga, Colombia, where she also presented aspects of Cypriot culture. In 2017, along with co-workers, she won a prize and a scholarship from Bogota’s Secretariat of Culture, Development and Sports for the project “Cocinando Paz” (Cooking Peace). Rebecca utilizes methodologies for learning, centered around the arts (music, gastronomy, literature and dance). Since moving back to Cyprus in 2018, she dedicates her time between teaching, developing educational and cultural projects and practicing jewellery-making. 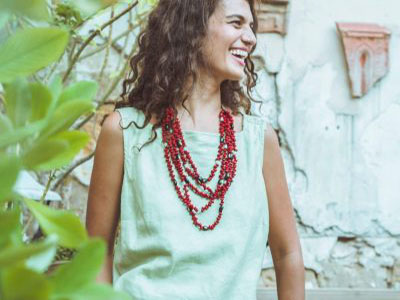